Vajra and some Barolo tasted in Rome 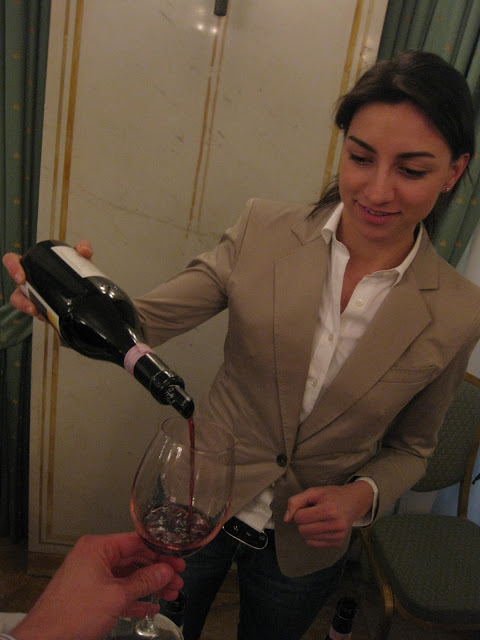 The Barolo was flowing Sunday February 27, at the Hotel Quirinale on Via Nazionale in Rome for the Go Wine tasting of piemontese wines.  Above, Francesca Vaira of G.D. Vajra pours me some of their wonderful Barolo Albe 2006.

I woke up Sunday morning pretty shot and absolutely exhausted.  My roman days are coming down to their last and the late nights with old friends and la dolce vita finally caught up with me.  One last tasting to attend before a flight back to L.A. on Wednesday.  Especially since I saw G.D. Vajra on the list, and I've been wanting to taste their wines for a while now. 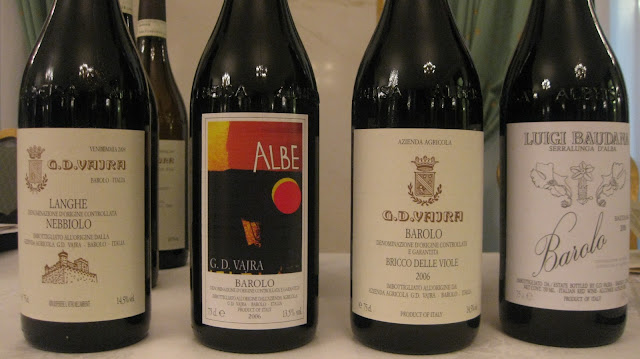 It was a pleasure to meet and taste with the very simpatica Francesca who had 4 vini rossi being tasted including the colaboration bottling of Luigi Baudana.


G.D. Vajra Langhe Nebbiolo 2009 14,5%
Aged and fermented only in steel,  this was a drinking fresh and very bright.  Very refreshing on the palate and it felt good to taste the young expression of Nebbiolo.  But still containing some nice tannin that completes the mouthfeel of the wine.
Mcduff has a nice in depth post on the 2006 version here.

Luigi Baudana Barolo Serralunga d'Alba 2006
30-40 year old vines
This wine was the most closed at the moment.  Some big fruit emerging, wish I revisited this one. 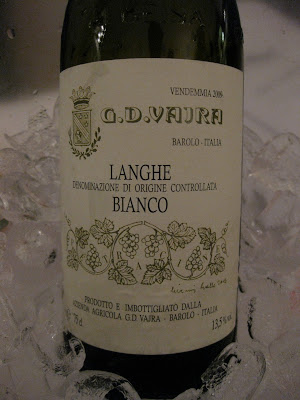 G.D. Vajra Langhe Bianco 2009 13,5%
100% Riesling, and unoaked.
When I arrived I beelined it to the Vajra booth to wrap my lips around this Langhe Bianco.  Was stoked to finally taste this and it didn't let me down one bit.  I have tasted heaps of terrific white wines this month, and this was one of my favorites.
Showing beautiful white fruit, full and thick with full body mouth feel.  Great acidity, crowd pleaser.

The only other Langhe Bianco tasted this day was by Cascina Ballarin. Consisting of 75% Chardonnay, Favorita and Pinot Nero.  But, when it comes to drinking a Langhe Bianco it will be hard to steer away from the version made by G.D. Vajra. 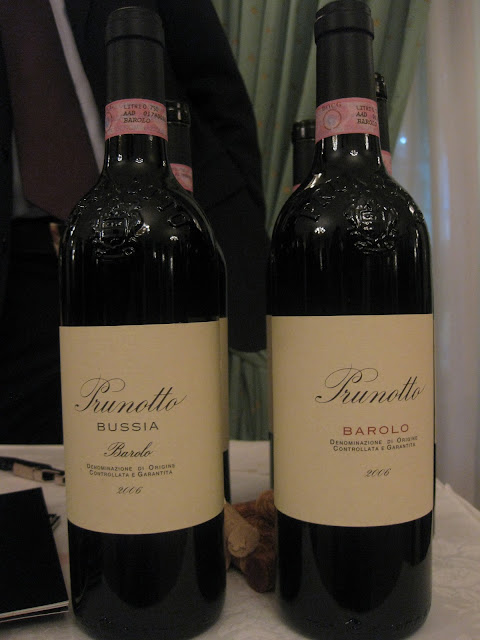 The Prunotto Barolo 2006 normale was the most enjoyable out of the Prunotto wines for me.  Aged in Botti Grandi with a small passing in barrique.  This wine was quite swampy with a hint of burnt hair, some good fruit and interesting to say the least.  The Bussia Barolo was less enjoyable for me showing off a more fruit forward style.  The Barbaresco and Barbaresco Bric Tarut bottlings werent doing much for me.  I've enjoyed their Barbera D'alba in the past but it didnt show up at this tasting. 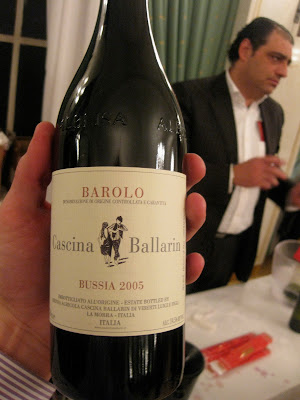 Cascina Ballarin Barolo Bussia 2005
This barolo of Cascina Ballarin was quite surprising.  Apart from the Dolcetto 2009 which overwhelming  candied fruit, these wines had the biggest expressions of terroir showing at the tasting.  The Barolo Bussia especially was really open, earthy and muddy.  I was also surprised to see these wines are barriqued (although I was told a mixture of things) and quite modern, but there was no overwhelming oak and I was digging the poop and fruit combo and how they were drinking on this day. 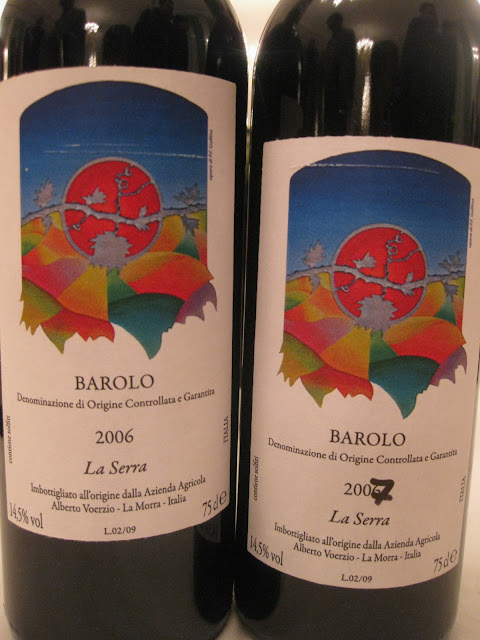 The Roberto Voerzio Barolo La Sera 2006 and 2007 were damn interesting and for sure standouts. Although there wasnt anyone to really explain the wines they remained a bit of a mystery.  I later researched a bit on Roberto (Vino al Vino) and discovered he is quite a mythical man and highly respected.  He founded his estate only in 1987, and has an extremely low production (one of the lowest in barolo) of around 40,000 bottles a year making 12 different wines (7 barolo) total.  Although considered a modernist, he is also referred to as the most traditional modernist.

I believe these two wines go through a traditional style maceration of 20 days and are then aged 24 months in barriques.  The 2006 had an incredible complexity, beautiful fruit and a lovely mint note that made it so unique.  Just a wine that really makes you say wow, and ponder for a few minutes. The 2007 which was just released was a whole different story still closed a bit, with a new shoe element, big cherry fruit and a very particular chocolate characteristic that made it so different from 2006.  Pretty cool to taste these two wines side by side.... 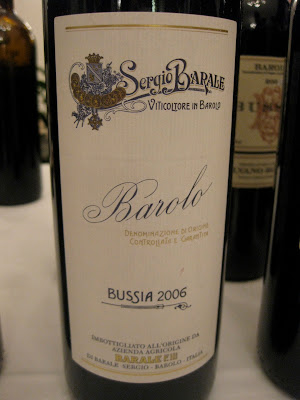 The 2006 Barolo Bussia of Sergio Barale was brilliant.  An excellent traditional style barolo that was complex and complete in the mouth.  The first taste was shortly after the bottle had been opened and it was far too closed.  I waited an hour and revisited and it had opened up so nicely.  This wine should go the distance in the cellar and develop some lovely characteristics. 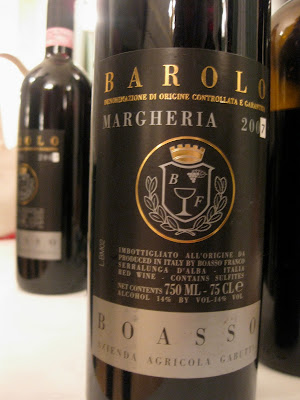 The traditional styled wines of Gabutti Boasso, which are aged 36 months in Slovenian Botti.  The Margheria 2007 was showing the best for me out of the Serralunga 2007 and Gabutti 2007. 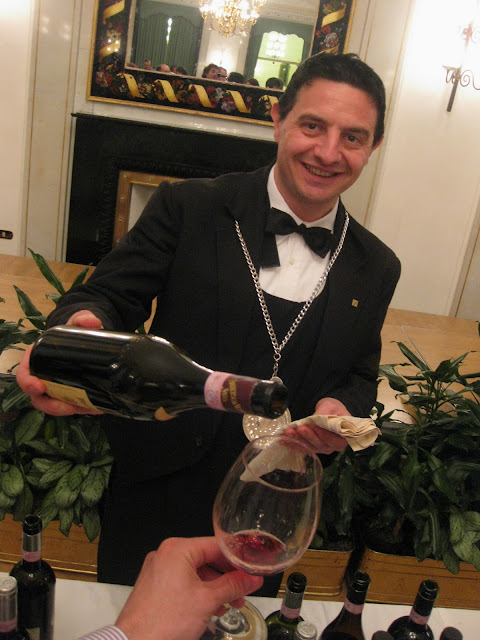 Above, Emiliano Di Leonardo Sommelier for the ''Enoteca booth'' pours some Francesco Rinaldi.  He had the biggest booth and the hardest job throughout the day.
A last day in Rome will consist of trying to find a bottle of the Langhe Bianco, then a visit to my favorite roman dining spot, Trattoria Lilli....
Salute!
on March 01, 2011