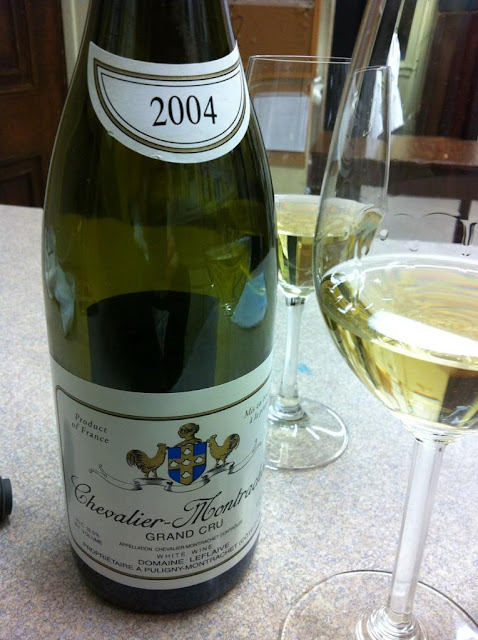 Had a couple of Leflaive white burgundy wines this friday... The Puligny-Montrachet 2003 ''Les Pucelles'' was showing an unusual weak side.  There was not much expression here, tasted almost watered down.. mineral, citrus and some toasted notes but a weak finish and a bit of a disapointment..

Later in the evening a superior Grand Cru from Leflaive made an appearance in the dining room...
Domaine Leflaive Chevalier-Montrachet 2004 Grand Cru was showing ages ahead of the ''Les Pucelles'' with an incredible complexity.
The 2004 harvest (ending on Oct. 3rd) took place a month later than the 2003 harvest (ending on Sept. 5th) in which the grapes suffered through some scorching summer heat.
Although tough to compare these two wines (sourced from different vineyards) I have had other great experiences with the 2004 vintage from Leflaive's Puligny-Montrachet.

The Leflaive website says the 2004 Grand Crus shouldn't be enjoyed before 2012.  I would beg to differ as this wine is already exploding with action...long, toasty, and mineral deliciousness!
on October 09, 2011